Call Me American: My Long Journey from Somalia to Maine

When the civil war in Somalia began, Abdi Nor Iftin was five. He and his brother became the sole providers for the family and were forced to attend a madrassa run by a man they called the “Angel of Punishment.” Amidst the bullets and the beatings, Iftin had one escape: American movies and music. At neighborhood showings of Rambo, Commando, and The Terminator, Iftin learned of America, taught himself English, and began to dream of a life in the United States.

In Call Me American, Iftin recounts his harrowing, extraordinary, and uplifting story. His love of western culture and music earned him the name “Abdi American.” (This became a liability when Islamic extremism took hold of Somalia.) Evading conscription by al-Shabaab while secretly filing stories for NPR and the BBC under penalty of death, he stayed in Somalia until he had no choice but to flee. He smuggled himself into Kenya, where a different but grinding life of hopelessness awaited. He spent his days hiding silently in an apartment from raids by Kenyan police, once passing time reading The Art of the Deal by Donald Trump. And then, a stroke of incredible luck: he won the Diversity Visa Lottery.

Iftin is now a proud and legal resident of Maine on the path to citizenship. He attends the University of Southern Maine and works as an interpreter with recently arrived Somali refugees. He also helps them integrate into their new American communties.

As a Muslim, Iftin is often worried about today’s America and its travel and immigration ban. Iftin’s dramatic, deeply stirring memoir is truly a story for our time: a vivid portrait of the desperate conditions that refugees seek to escape and a reminder of why western democracies still beckon those looking to make a better life. 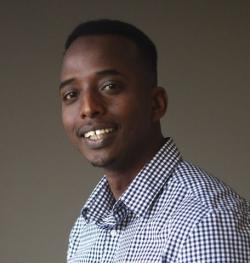