This Chair Rocks: How Ageism Warps Our View of Long Life

We may think we know what lies ahead as we age: a grim slide into depression, dementia, and dependence. But that’s just the party line, and author and activist Ashton Applewhite debunks it in spades.

Part monologue, part consciousness-raiser, her book This Chair Rocks dispels myths about late life, and proposes an alternative to worrying about getting old: wake up to the ageist messages that frame two thirds of our lives as decline, cheer up, and push back. It’s time to work together to make discrimination on the basis of age as unacceptable as any other prejudice.

Ashton Applewhite is the author of This Chair Rocks: A Manifesto Against Ageism. In 2016, she joined Next Avenue’s annual list of 50 Influencers in Aging as their Influencer of the Year. Ashton has been recognized by The New York Times, National Public Radio, and the American Society on Aging as an expert on ageism. She blogs at This Chair Rocks, has written for Harper’s, Playboy, and The New York Times, and is the voice of Yo, Is This Ageist? Ashton speaks widely, at venues that have ranged from universities and community centers to the TED stage and the United Nations. She has been named as a Fellow by the Knight Foundation, The New York Times, Yale Law School, and the Royal Society for the Arts. Sponsored by NH Alliance for Healthy Aging/ Endowment for Health. 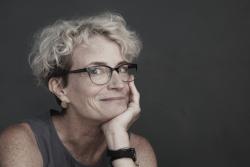